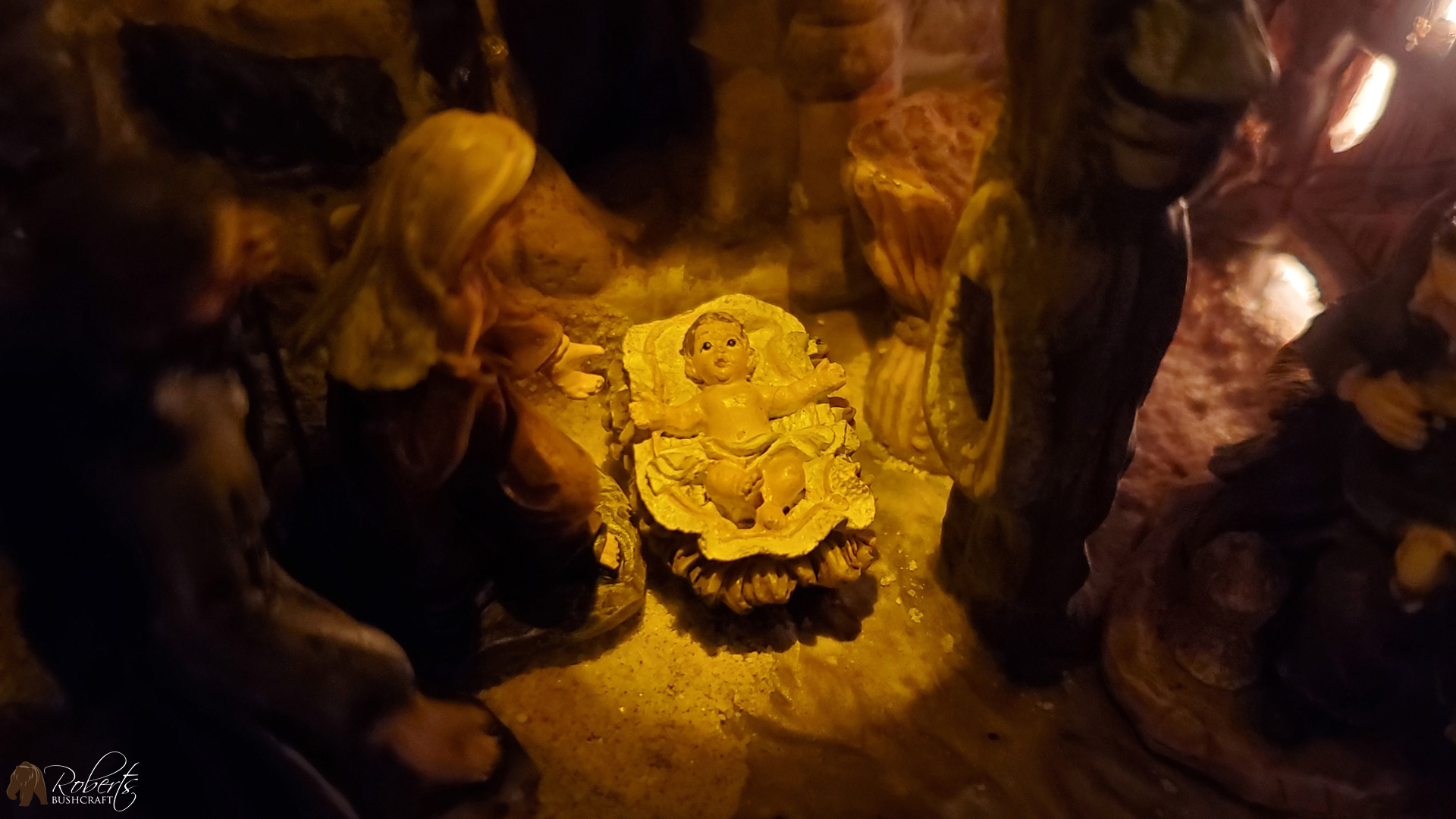 We picked up a new (to us) Nativity scene. This is the Member's Mark 48 Piece Bethlehem Village and we absolutely love it.

It's absolutely gorgeous and is a wonderful way to display in honor the birth of Jesus Christ our Lord.

The Birth of Jesus Christ

The Jews lived under the rule of the Roman government, led by Emperor Caesar Augustus. While Mary was pregnant, the Roman government made a law that everyone must go to their hometown to be counted. Counting all the people is called a census. Joseph took Mary to his family’s hometown of Bethlehem according to Luke 2: 1-5

1) And it came to pass in those days, that there went out a decree from Caesar Augustus that all the world should be taxed.

2) (And this taxing was first made when Cyrenius was governor of Syria.)

3) And all went to be taxed, every one into his own city.

4) And Joseph also went up from Galilee, out of the city of Nazareth, into Judaea, unto the city of David, which is called Bethlehem; (because he was of the house and lineage of David:)

5) To be taxed with Mary his espoused wife, being great with child.

With almost everyone needing a place to stay, those hotels would soon run out of room. That is exactly what happened in Bethlehem. Many people had already arrived there, and all the inns were full. Probably the best place Joseph could find for him and Mary to stay was in a stable with the other travelers’ animals in Luke 2: 6-7

6) And so it was, that, while they were there, the days were accomplished that she should be delivered.

7) And she brought forth her firstborn son, and wrapped him in swaddling clothes, and laid him in a manger; because there was no room for them in the inn.

The miraculous birth of the Son of God had occurred. Only Mary and Joseph knew the King of kings had arrived. No trumpets sounded; there was no royal announcement. But there was about to be. Luke 2: 8 tells us:

8) And there were in the same country shepherds abiding in the field, keeping watch over their flock by night.

A group of shepherds was taking care of their sheep on the hillside just outside of Bethlehem. The only light that shone that night was the soft moonlight. Suddenly, a bright light pierced the darkness, and the shepherds saw a messenger from God. This was unlike anything they had ever seen, and they were gripped with fear. Luke 2: 9-15

9) And, lo, the angel of the Lord came upon them, and the glory of the Lord shone round about them: and they were sore afraid.

10) And the angel said unto them, Fear not: for, behold, I bring you good tidings of great joy, which shall be to all people.

11) For unto you is born this day in the city of David a Saviour, which is Christ the Lord.

12) And this shall be a sign unto you; Ye shall find the babe wrapped in swaddling clothes, lying in a manger.

13) And suddenly there was with the angel a multitude of the heavenly host praising God, and saying,

14) Glory to God in the highest, and on earth peace, good will toward men.

15) And it came to pass, as the angels were gone away from them into heaven, the shepherds said one to another, Let us now go even unto Bethlehem, and see this thing which is come to pass, which the Lord hath made known unto us.

Suddenly a large group of angels appeared, singing praises to the Lord. The shepherds must have been amazed at the sight of the heavenly host! Then the angels returned to heaven. The shepherds didn’t waste a minute. They rushed to Bethlehem to see what the Lord had told them about. Their only clues were that the baby was a boy, and that He would be lying in a manger. This was a great clue - surely Jesus was the only baby tucked into a manger that night! And at least the shepherds knew where to find a manger. Luke 2 16:18 reads:

16) And they came with haste, and found Mary, and Joseph, and the babe lying in a manger.

17) And when they had seen it, they made known abroad the saying which was told them concerning this child.

18) And all they that heard it wondered at those things which were told them by the shepherds.

The Bible tells us the shepherds went out and told everyone what the angels had said, and what they had seen with their own eyes. Jesus’ birth was way too great to keep to themselves!

After going around telling the good news, the shepherds returned to Jesus. They praised God for what He had done (Luke 2:20). They must have been amazed that God chose them to be a part of this incredible night. The angels did not announce Jesus’ birth to Emperor Augusta, or King Herod, or even the Jewish religious leaders, as we might expect. The angels appeared to shepherds in a field. Being a shepherd was a lowly job. It was passed down to the youngest, least important son of a family. So, why would God chose to tell the good news to them?

Maybe it was because they were looking for the Messiah to come. Perhaps it was because the rich and the famous of the day would not take the time to acknowledge the miracle that had happened. Maybe those who were “important” would not bow down to praise anyone else - not even God’s own Son.

Or perhaps it was because the shepherds would understand Jesus’ role better than anyone else would. Day after day, the shepherds cared tenderly for their sheep. Many of the young lambs they raised would be taken to the Temple, just a few miles from Bethlehem, to be killed as an offering to cover the sins of the Jewish people (Leviticus 17:11). They knew that God required a first-born, spotless, male lamb for an acceptable sacrifice. The Bible calls Jesus, “The Lamb of God who takes away the sin of the world!” (John 1:29) One day He would offer Himself as the perfect sacrifice that would take away the sin of all those who believe in Him (Acts 10:43).

As Christmas approaches, and we sing songs about shepherds and angels, let’s remember that on that special night, God was announcing the fulfillment of His promise to Abraham. Through this Baby, placed in Abraham’s family line, ALL people would be blessed (Genesis 22:18). Everyone.  This includes you. We are ALL given the opportunity to believe in Jesus, to put our trust in Him, and be saved from the punishment of our sin.

Then, just as the shepherds ran out to tell everyone about the miraculous birth of Jesus, we are also called to be witnesses for Jesus. Those of us who have received forgiveness for our sin are told to go and tell others. This Christmas season, pray for the opportunity to tell someone the good news about the Messiah, who was born to a young Jewish girl in Bethlehem.

The good news is Jesus was born to be the Savior of the world!