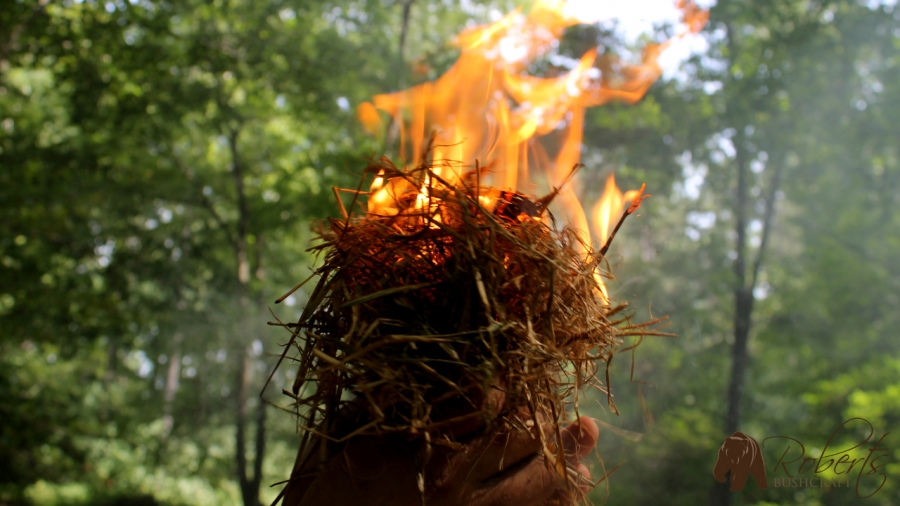 Learning the bow drill can be difficult. Choosing the right wood for the bow drill, the hearth board and bearing block can drive a person insane with frustration from failure to produce a coal when it seemed like all the proper steps had been taken.

"Fire is the most tolerable third party." - Henry David Thoreau

That is where my teachings with Noah had become stale. Countless times he tried with mighty hopes of creating a coal only to fail before generating enough heat to create smoke between the drill and hearth. Countless times he pulled to and fro with the bow, only to snatch the drill out of the bow and bearing block. This Sisyphean task of primitive fire making was becoming a fading dream. It was becoming the worst type of work a person could do, the unrewarding type. Failure starved Noah and robbed him of any hope of creating a friction fire. He had given up.

The day had been well spent at the Roanoke Rapids Lake learning how to use a pair of trousers for flotation. The idea is simple; once in the water you remove your trousers, tie the legs together with an overhand knot, put it around your neck and then fill the trousers with air by pounding the water near the waistline. Noah gained great confidence learning this technique, one that I was taught in the USMC many years ago. I decided to bring up the bow drill.

"What now? What is your next step?" I asked him.

"Don't drown and swim to shore." he replied.

Puzzled, he asked "What do you mean?".

I explained to him that remaining on the proper side of drowning was of great importance but he would also need to quickly dry both himself and clothing once he made it to shore. I could almost see the painful memories of failed attempts at primitive fire making dance across his brow as he began to understand the direction that I was heading. What good does it do one to keep from drowning only to die of hypothermia? Noah sat his jaw and sighed between gritted teeth. He knew what he had to do.

The bow was strung, the spindle twisted in and pressed down onto the hearth board. In rhythmic and determined motion Noah drew the bow back and forth, pushing faster and faster while increasing downward pressure on the drill. The hearth began to smoke.

The air began to fill with the sweet smell of burning cedar and I could see Noah begin to slow, weakening from the rapid pushing of the bow. Somewhere between here and there Noah found something inside of him, something that he felt in his heart was superior to this circumstance. With labored breath and sweat beading his brow he redoubled his efforts.

That young man created his first friction fire ember. Not only that, but he used that ember to blow his tinder bundle made of poplar bark and cattail into flame. He had fire! He had something else, too. He now had a way to dry his wet clothing, purify water, cook, and provide light. Eureka! Hard workdoes pay off.

Noah had a new sense of accomplishment, vanquishing a foe that had tormented him so. The smile so proudly worn at the 1:50 minute video mark revealed to me that he had found something.

Noah found a small piece of independence. That is a flame that I will fervently fan for the rest of my days.