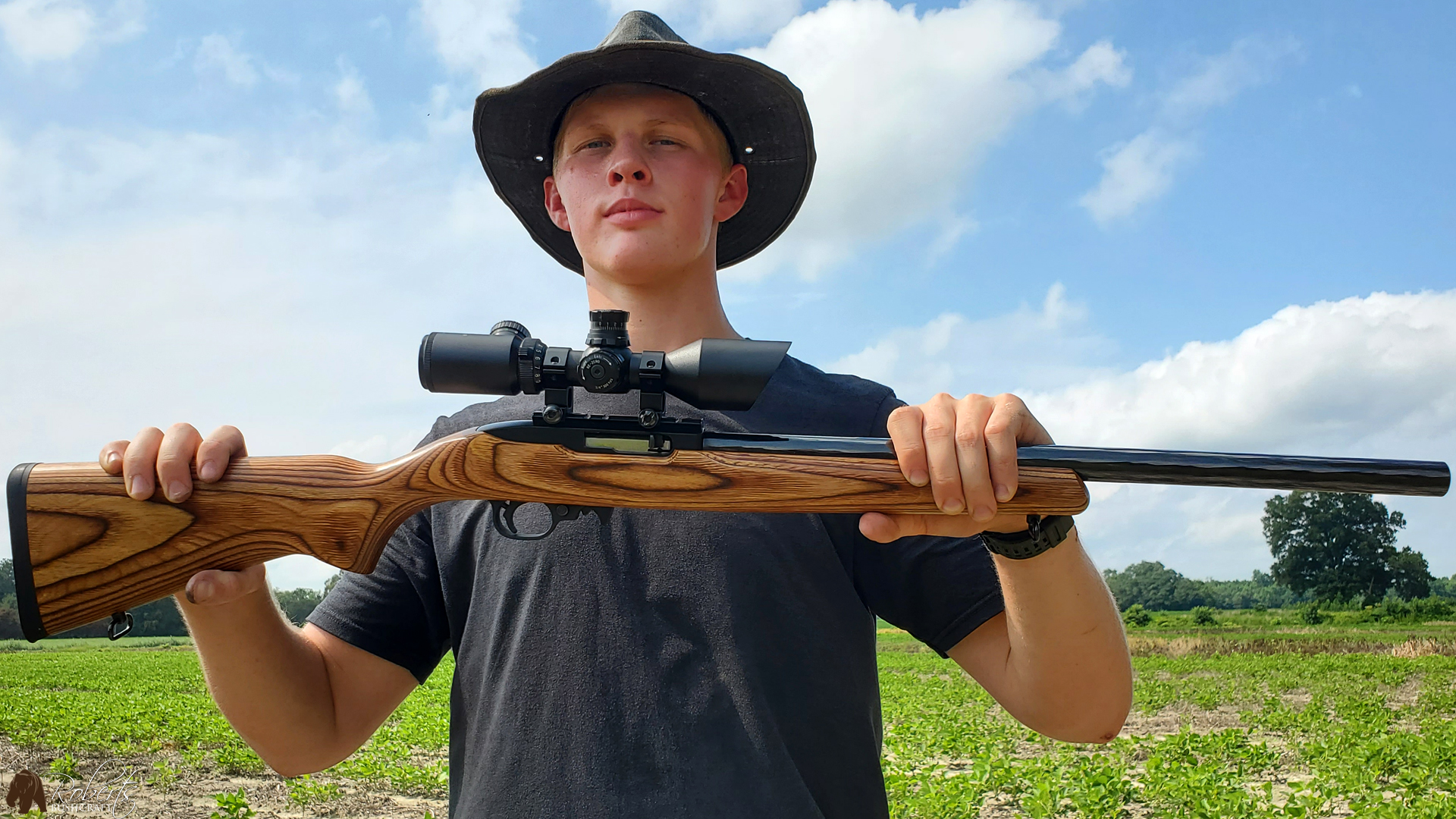 The Ruger 10/22 is one of the world's most versatile firearms not only because of the chambering but also because of the availability of aftermarket parts.

You can easily take a standard, "basic" 10/22 and turn it into a fine target rifle. I shot a Ruger 10/22 for the first time when I was around 10 years old. It was my Grandfather's rifle. His rifle featured a spiral hammer-forged stainless steel bull barrel

, and was all held together with a Hogue Overmolded stock

. This rifle was his truck gun which meant it literally had years of carbon buildup and would often get quite dirty. I remember one time specifically seeing carbon/grime built up around the chamber and on the bolt and thinking to myself, "This gun is not going to fire". Much to my surprise, it did fire! Again and again and again! I was impressed not only at its ability to fire despite the carbon build-up but also by its accuracy! That rifle was actually capable of putting two bullets in the same hole. Seeing firsthand the reliability and the accuracy of his 10/22 made me want one! 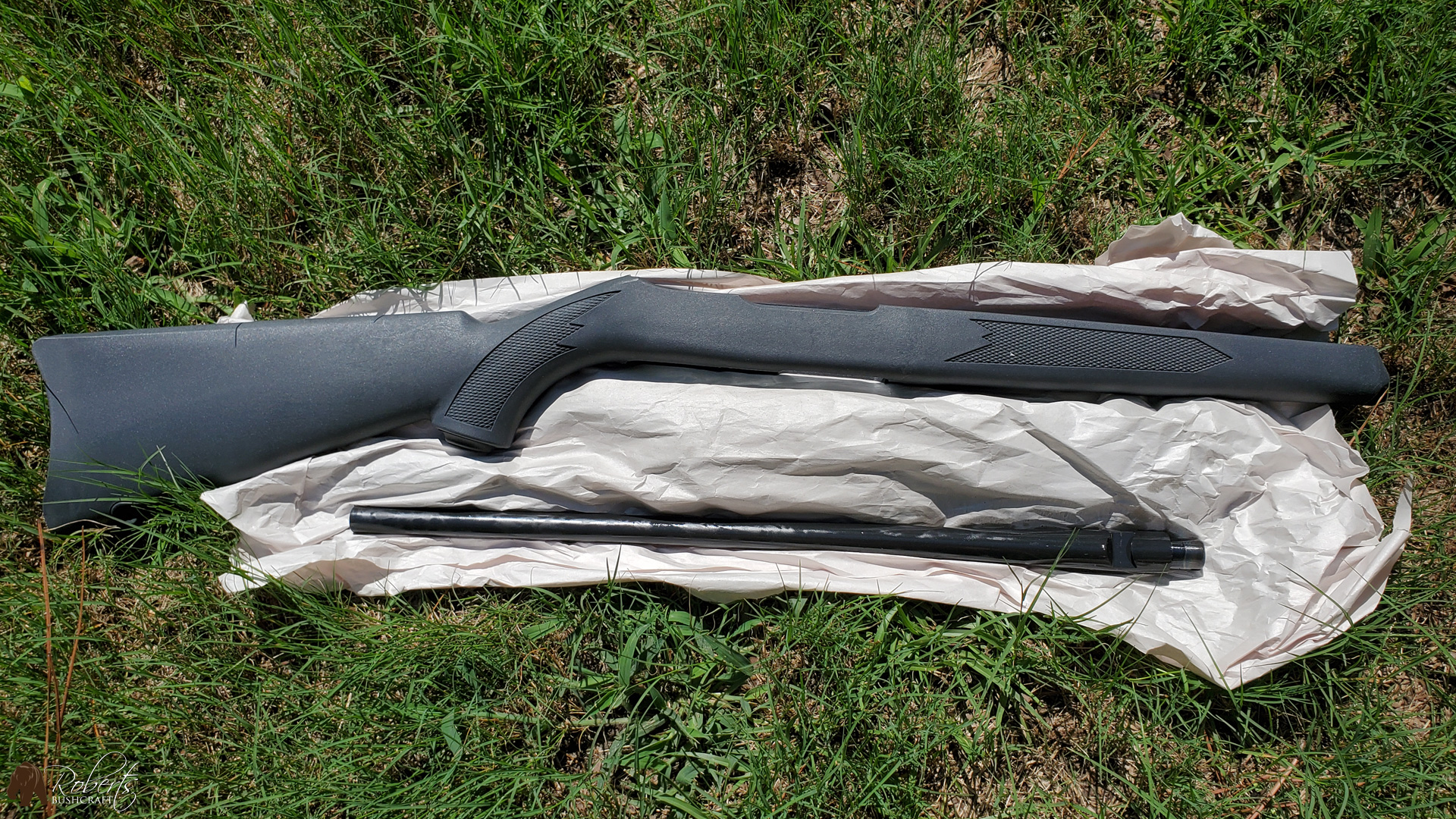 One of the first upgrades I did to this rifle had nothing to do with the functionality, but the overall aesthetic. I added a laminate wood stock featured in the older Ruger Target models. It is made to fit .920 barrels, and it looks beautiful so this was a must-have!

Shortly after replacing the stock, I replaced the magazine release. The original was very shaky and was made of plastic. It was actually the reason a pin would fall out upon removal of the action from the stock. I decided to replace the original with a Volquartsen

magazine release which is made of aluminum and solved the issue with my pin. It created a tighter fit which held the pin in place perfectly. The first thing I had to do was remove the two pins which held the trigger group to the receiver. 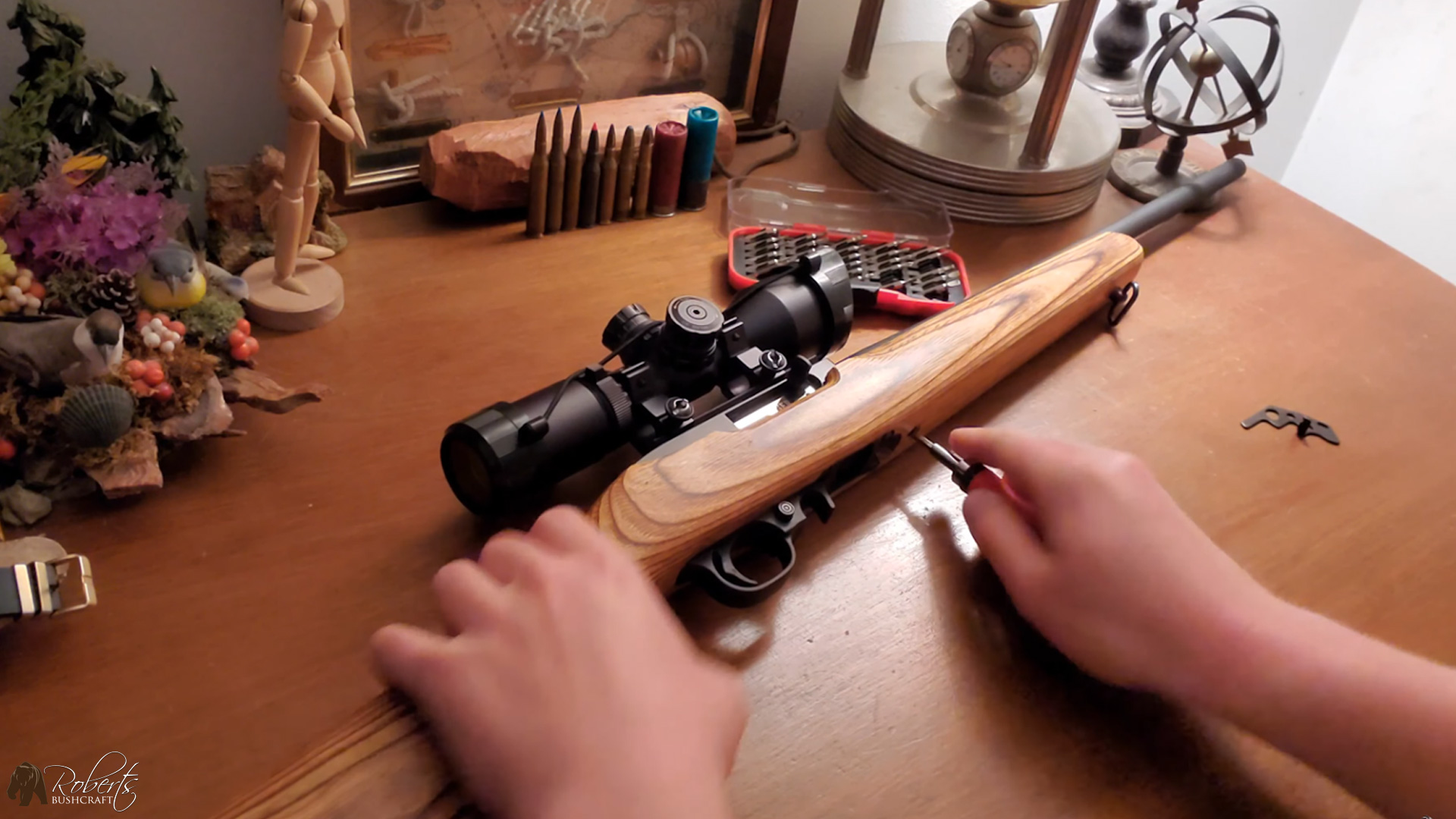 Then I had to remove the pin which held the magazine release in place which is located directly below the front large trigger group pin. This is the pin that I mentioned would fall out easily with the stock magazine release. 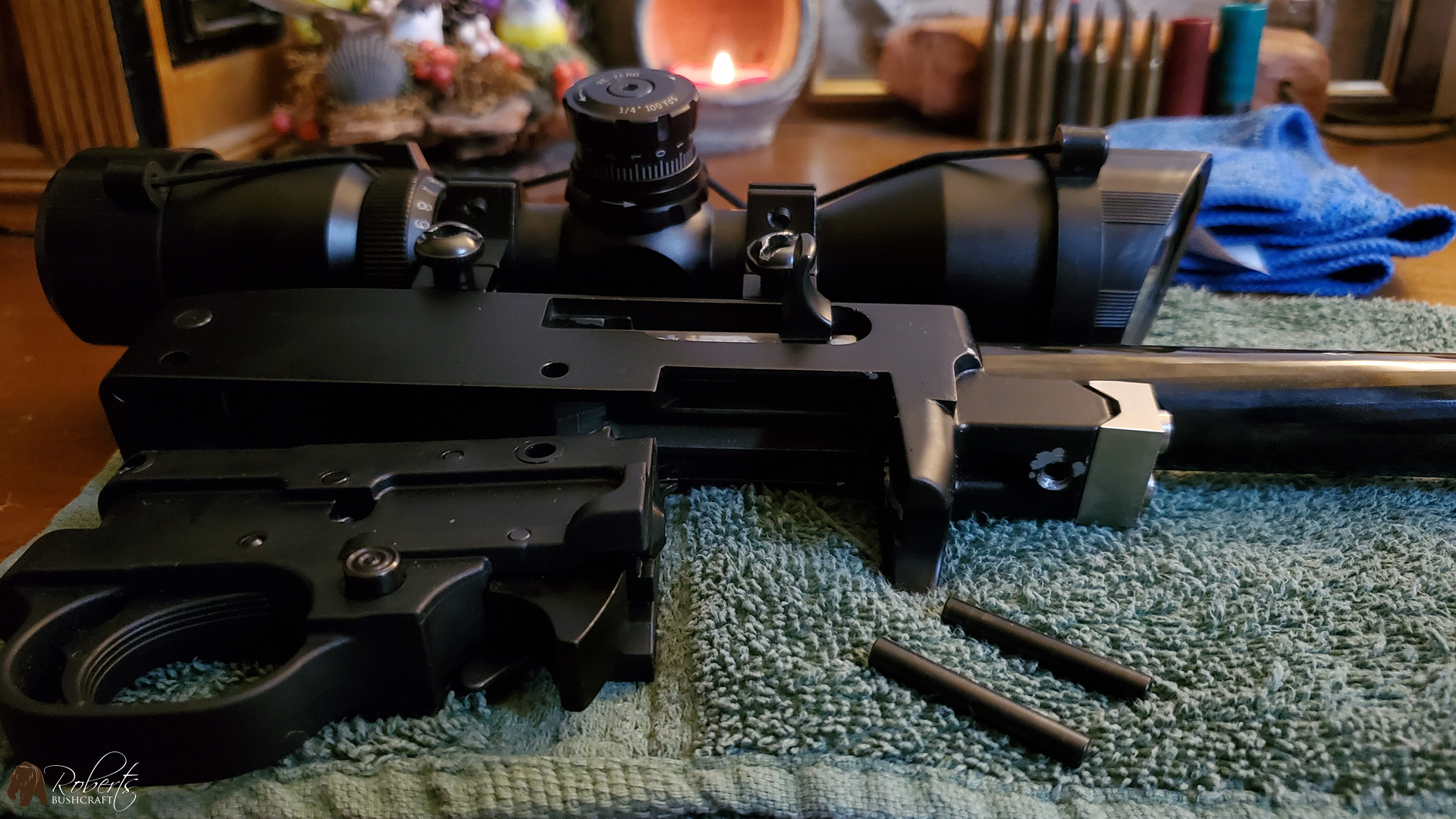 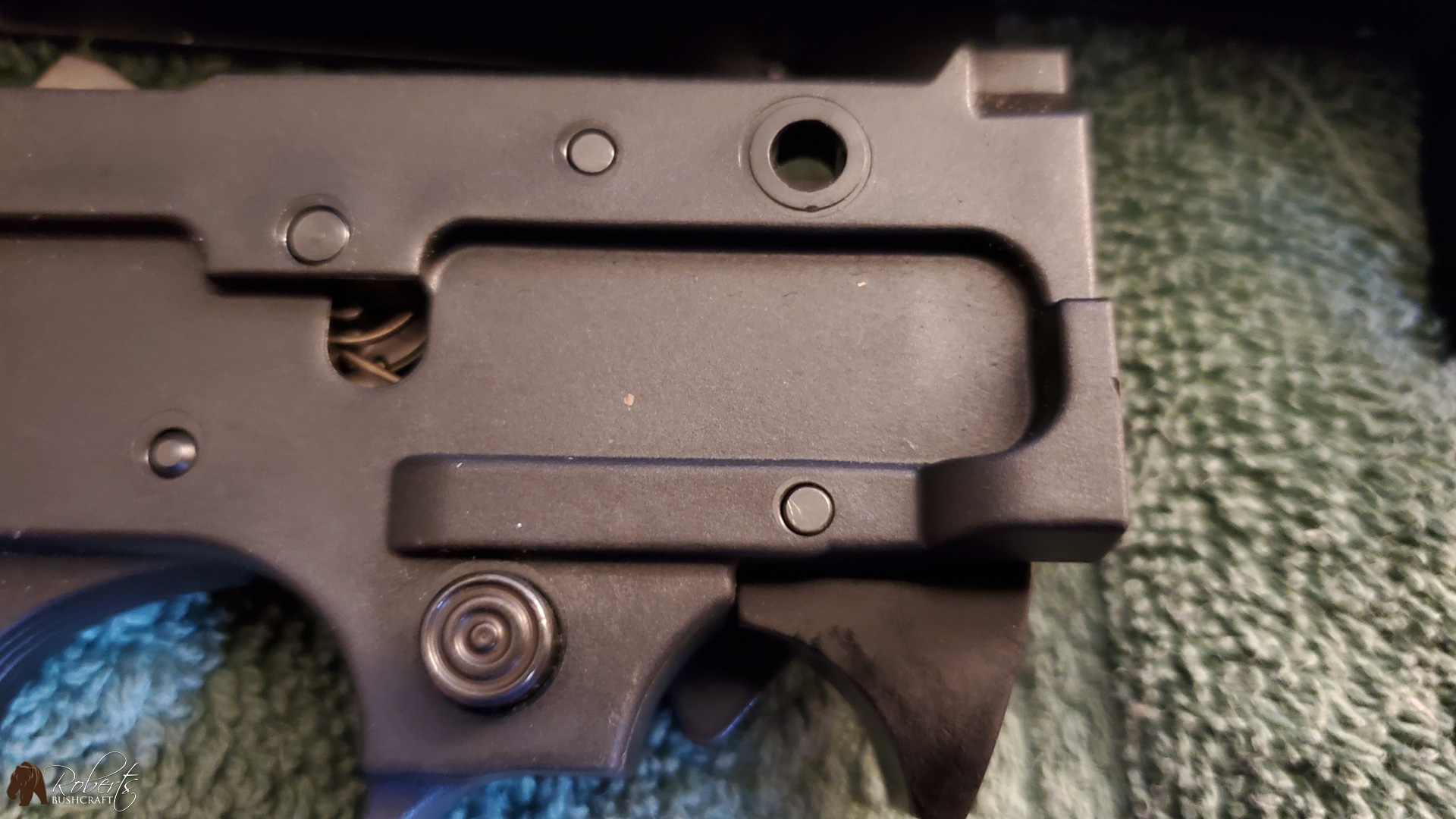 When trying to align the release with the pinhole, you should be able to see light completely through the hole with no shadow. 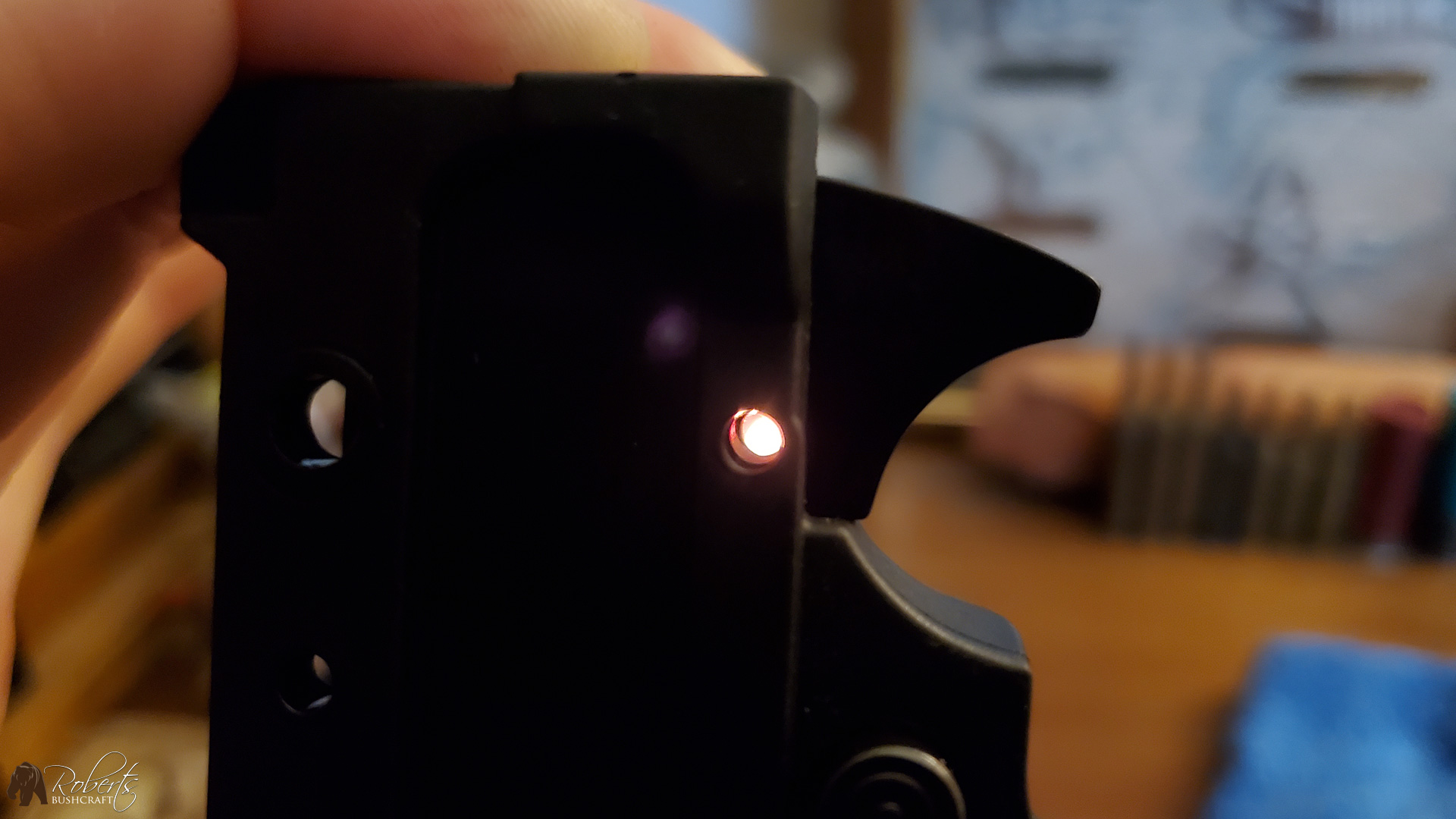 I like this magazine release better for many reasons, it looks better, feels better, solves the problem of the loose pin and is made of aluminum.

In order to remove the original bolt release I had to remove two pins on the trigger group. 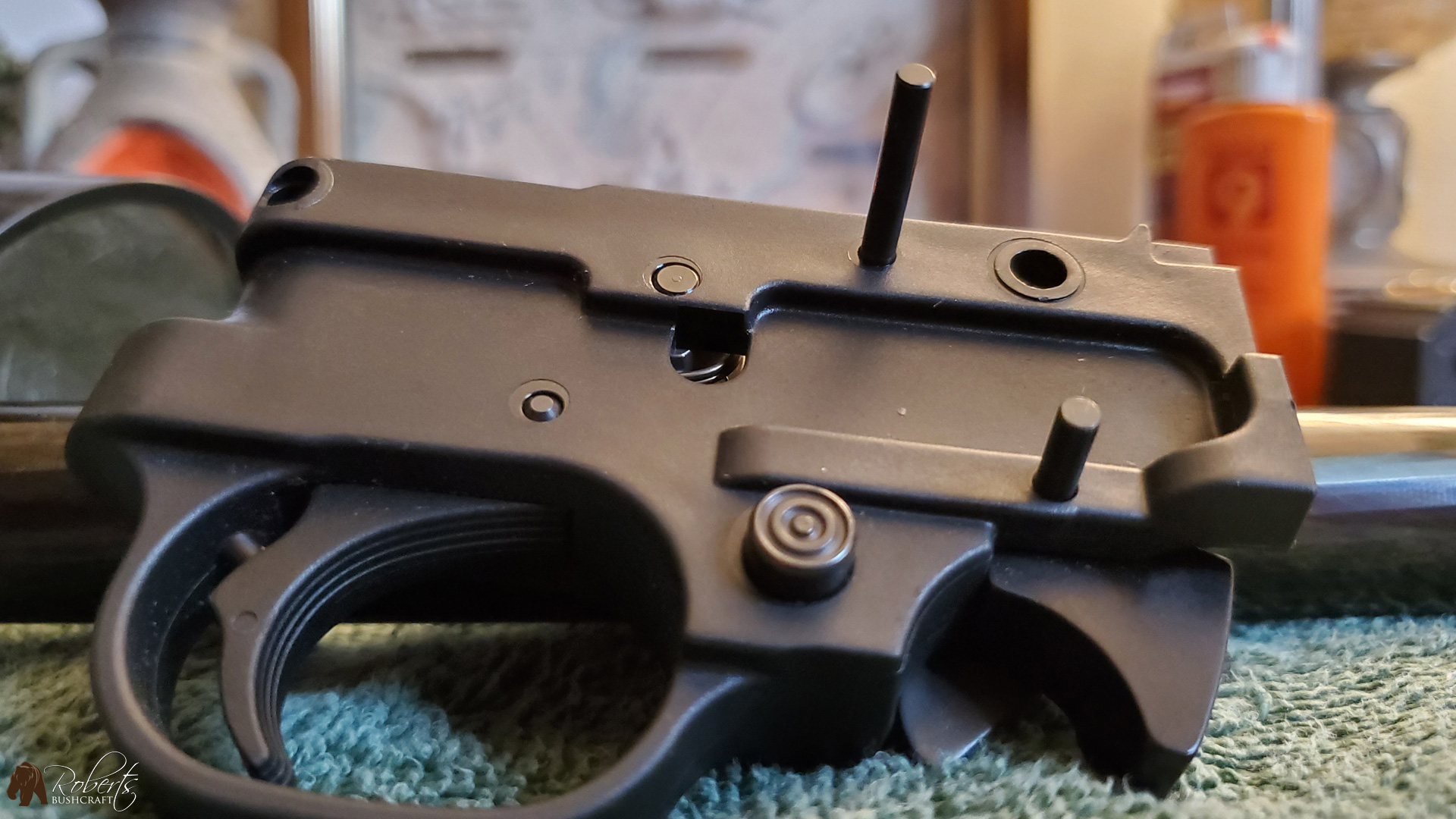 After removing these two pins I had to move a spring out of the way that was resting under the top pin. 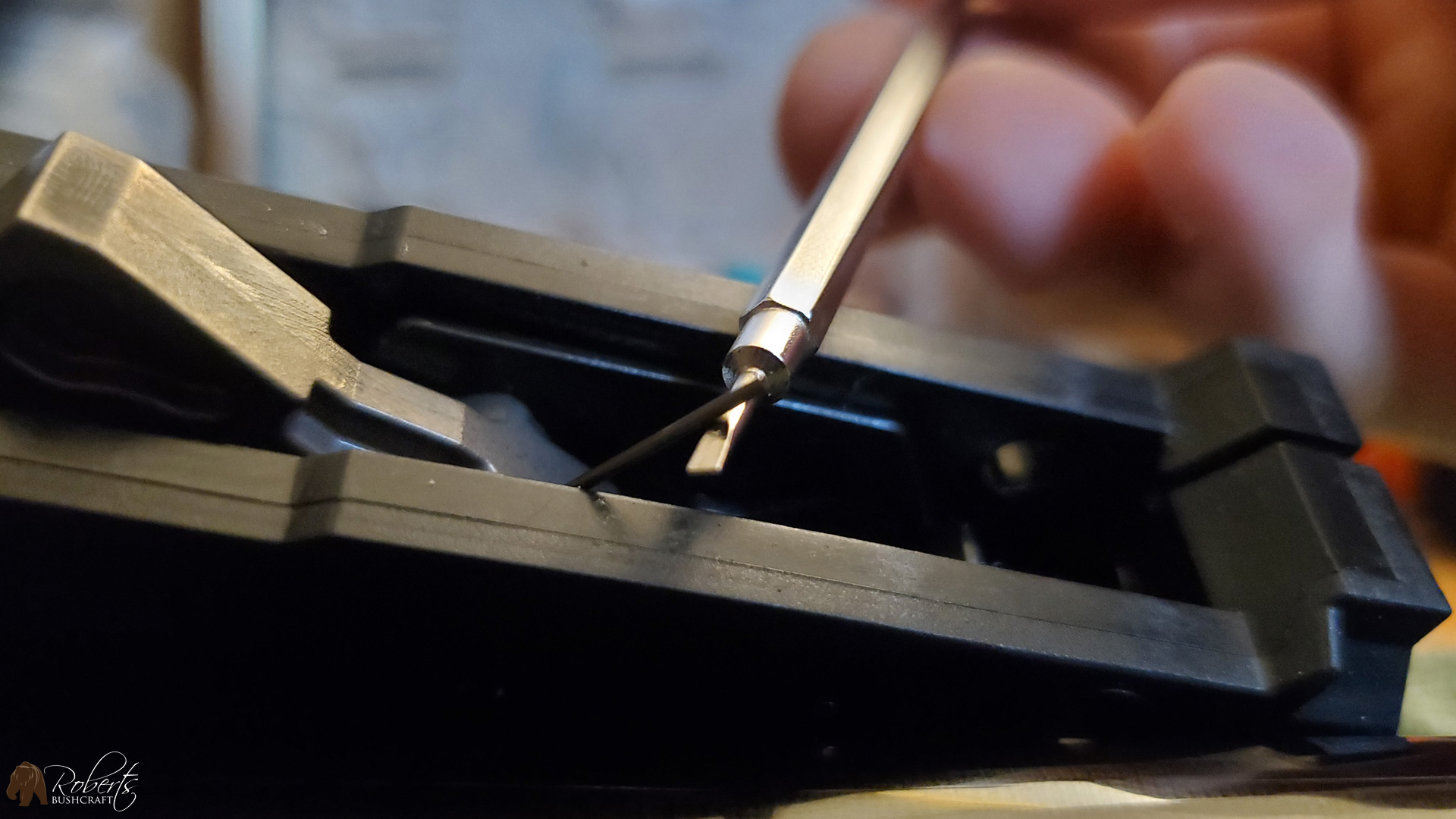 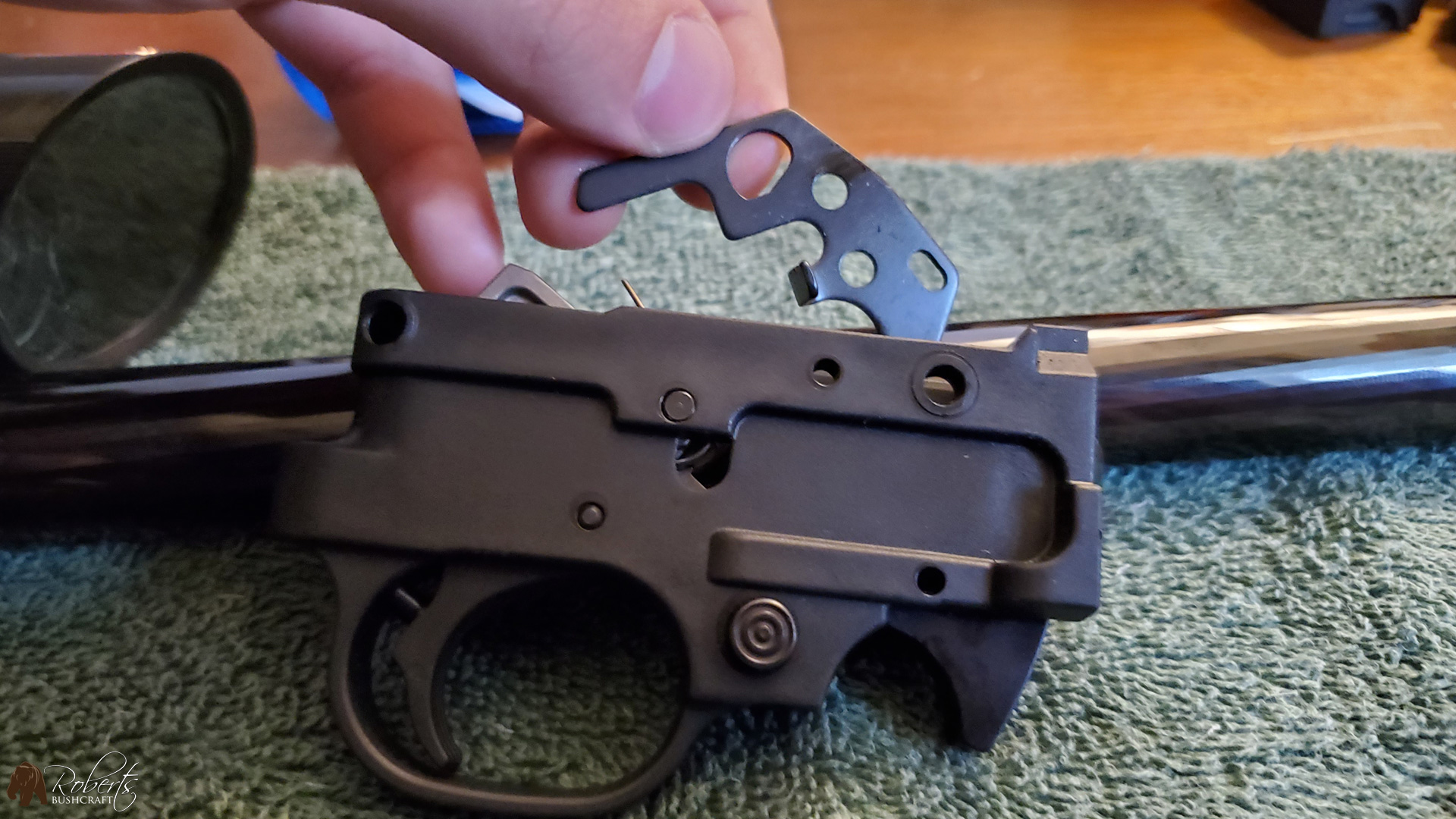 After you put the new bolt release piece in, make sure to push the spring under the upper pin. 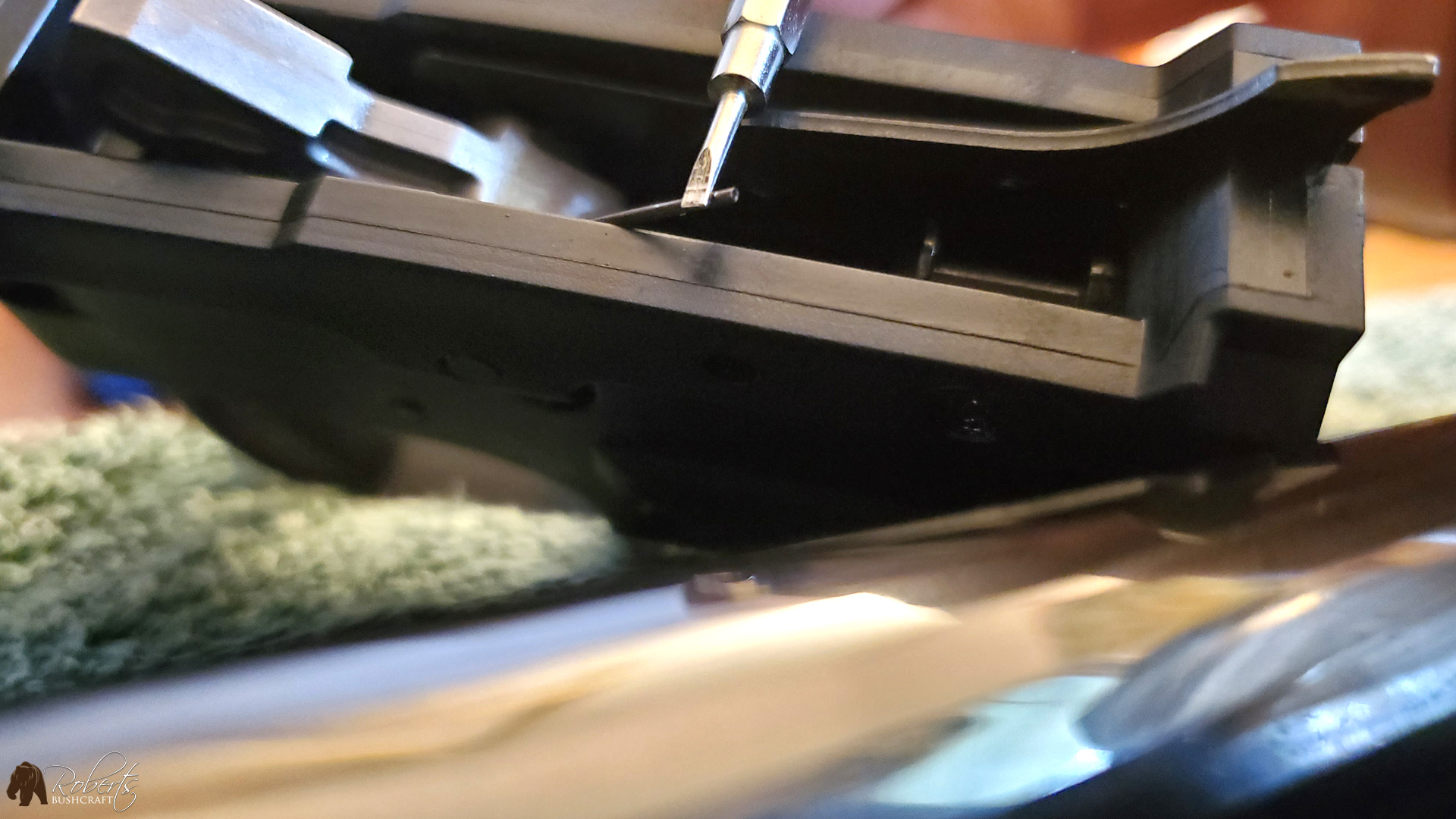 It should be completely under the pin, with the pin passing over the spring and through the pin holes on the two remaining pieces. 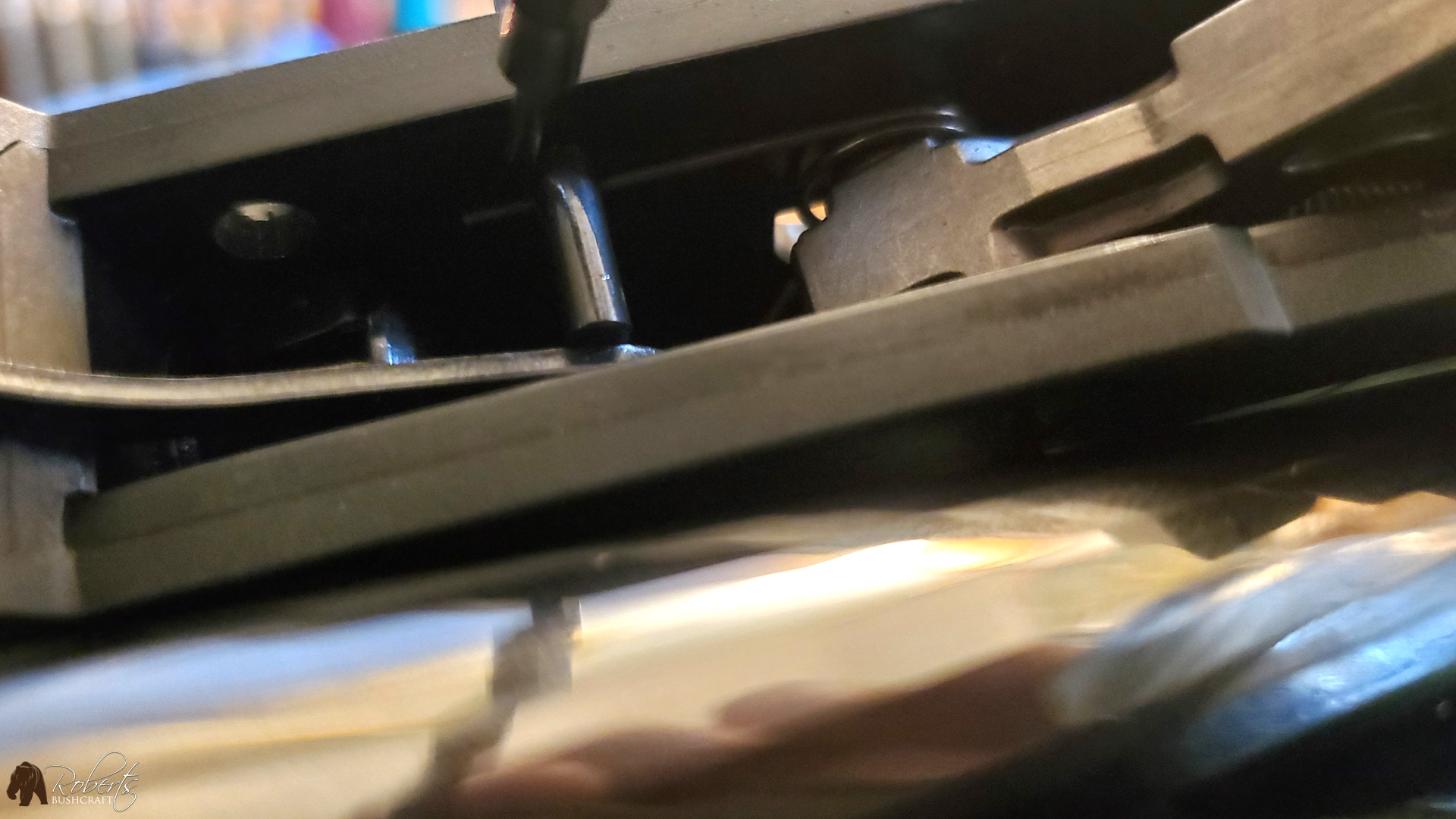 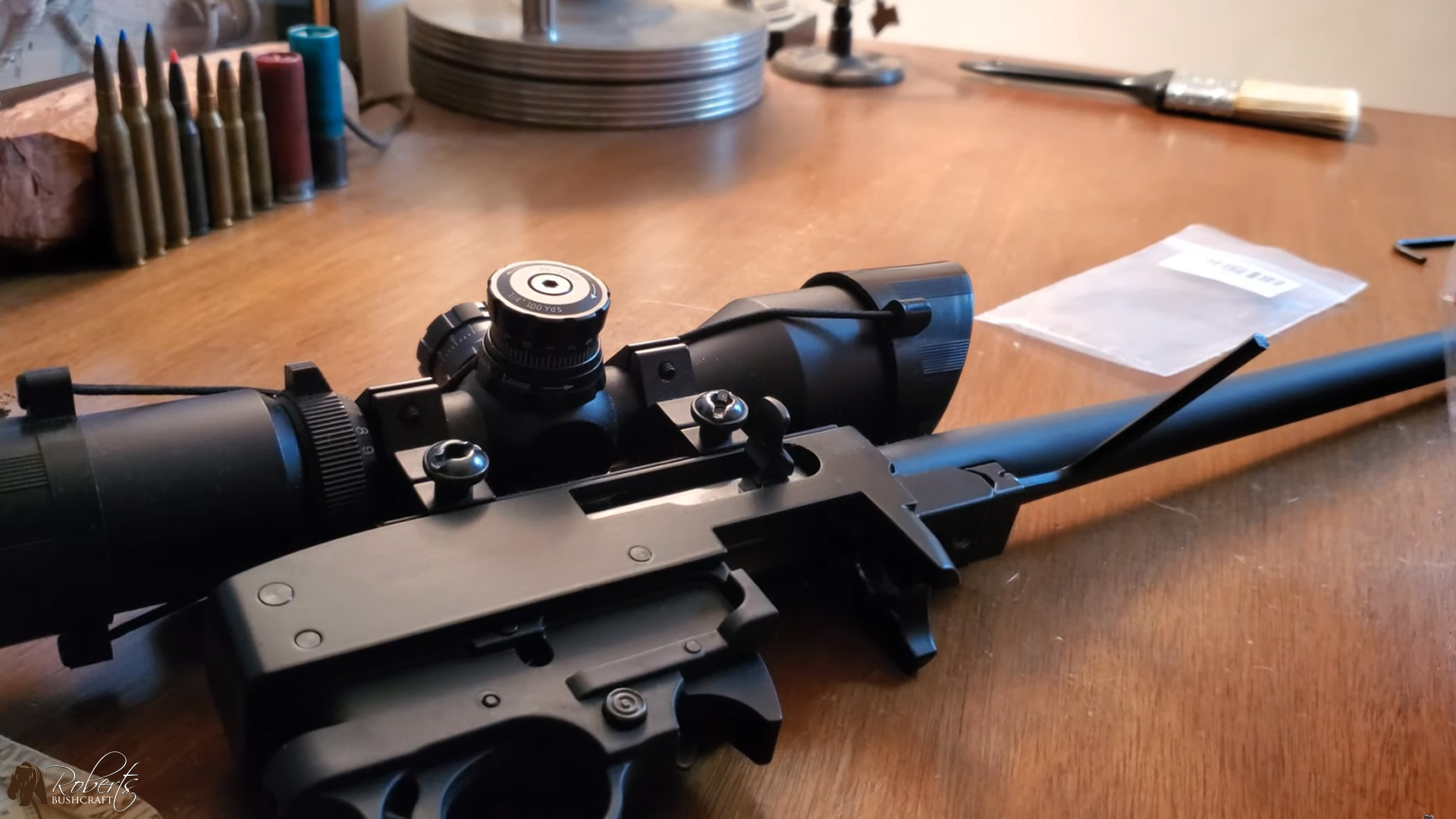 I had some trouble removing the barrel so I used the bolt to help in the process by pulling the bolt back and letting it go forward. This action was enough force to aid in the removal of the original barrel. While putting the new barrel on I had to tap it into place. I simply laid a towel folded over a few times on the muzzle end of the barrel and tapped it down. It is worth noting that the extractor on your bolt must line up with the cut-out on the barrel! 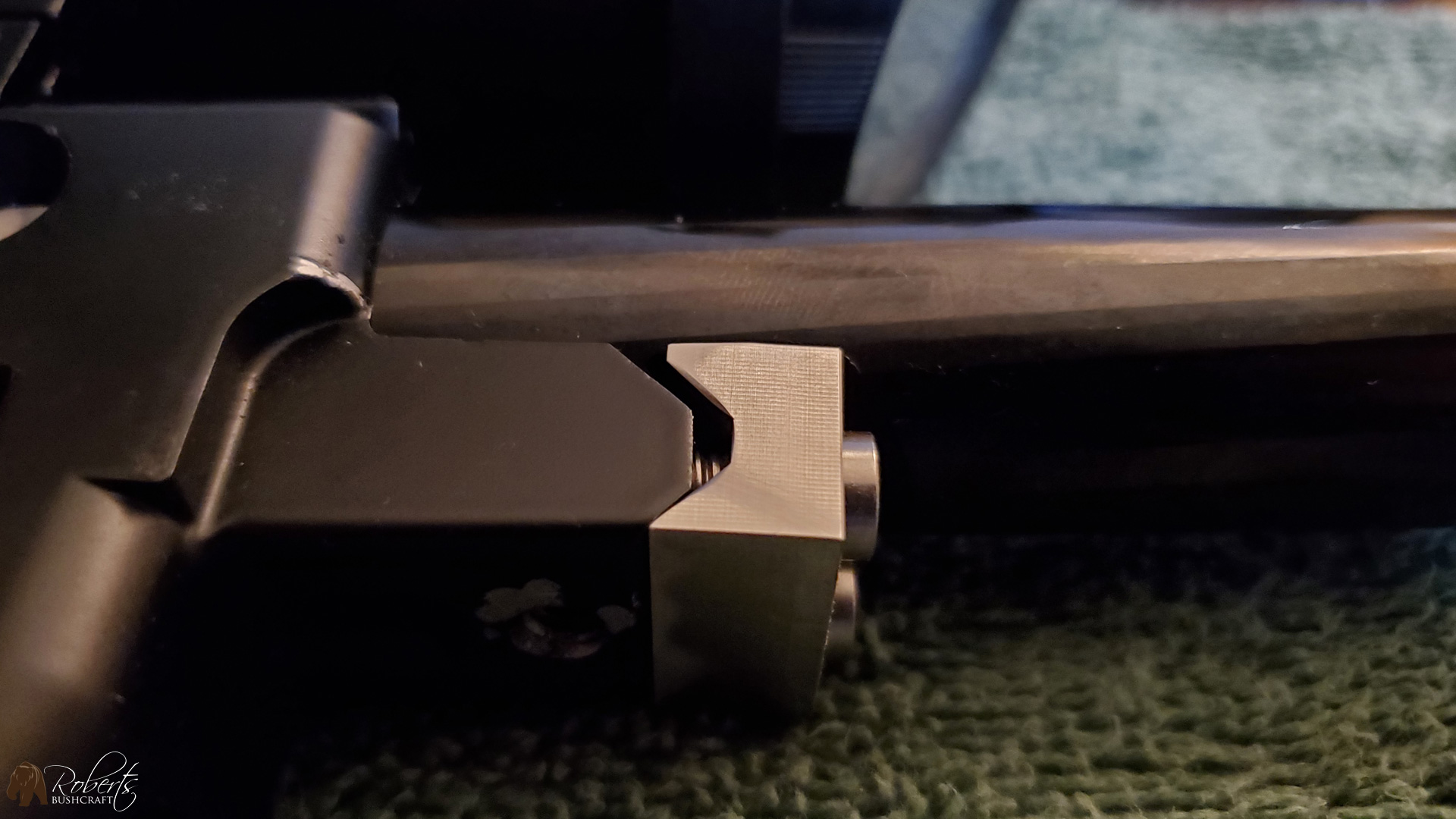 I used a Tactical Solutions V-Block

and Raven Eye Custom Stainless Steel Set Screws. The main reason I chose the stainless steel parts was to prevent what some call "barrel droop". Simply put, this is when the weight of the barrel causes it to pull the screws out of the receiver making the barrel drop down or "droop" which will cause inaccurate shots and will just make your gun look ridiculous. 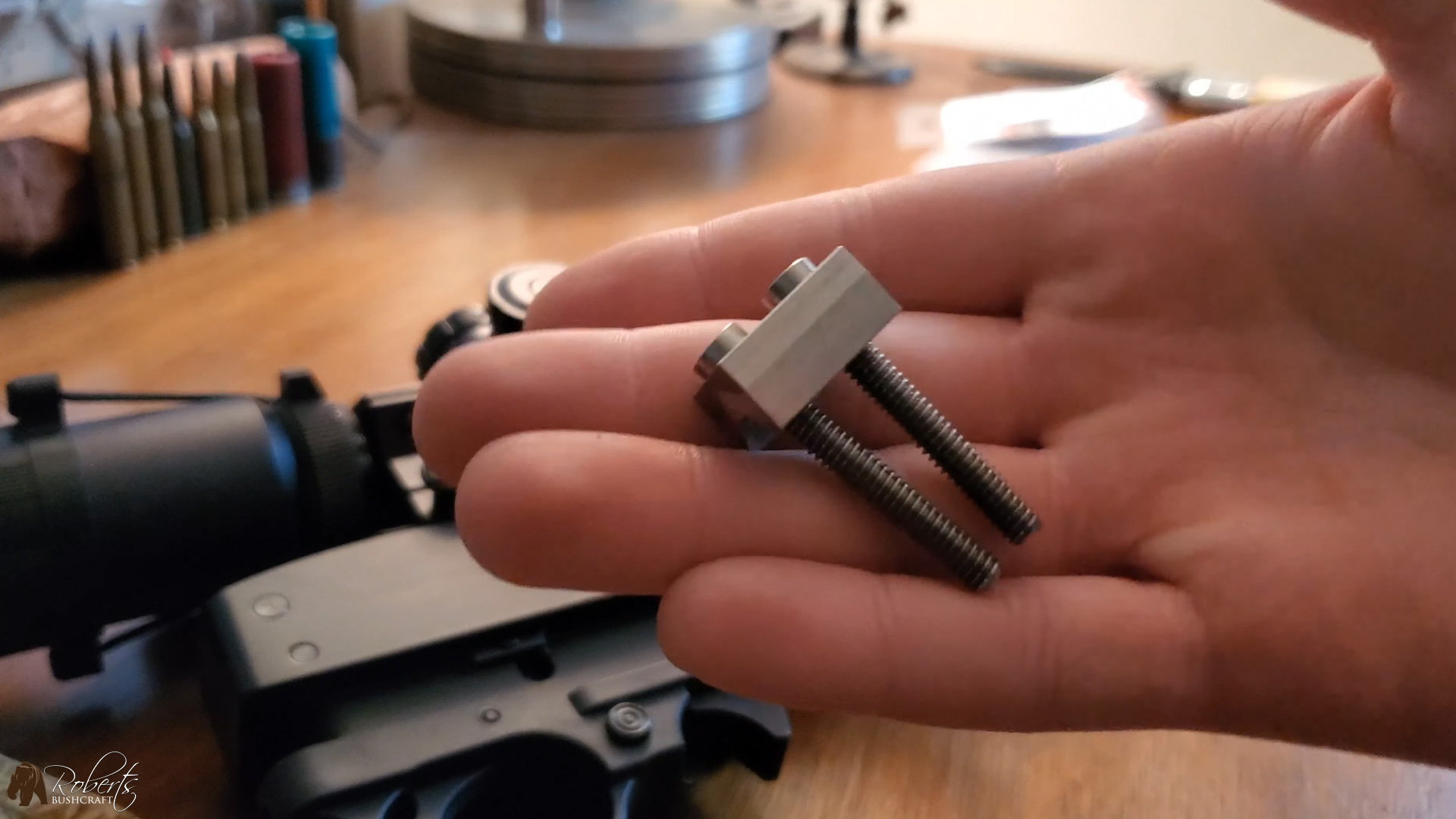 These stainless steel parts will eliminate any chance of that happening and have also been known to improve accuracy. Now with all of these parts assembled, there is only one thing left to do! 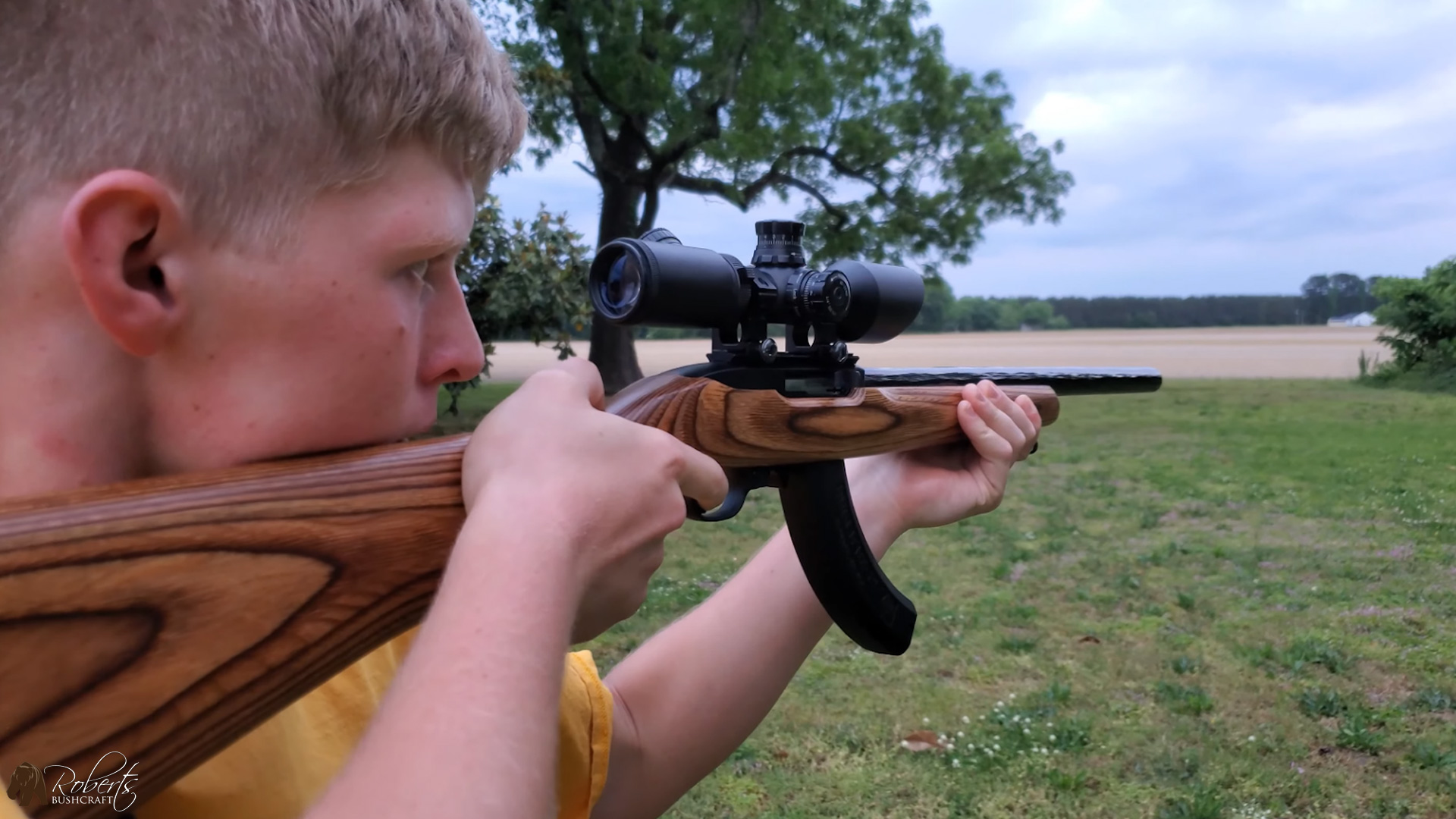 The main question that I have received about this rifle has to do with the scope. The scope is a Barska 3-9, Illuminated reticle. In the future, I will get some lower scope rings and maybe a Primary Arms optic because I love the way they have the range estimation system built into the reticle. I love this Ruger 10/22 for so many reasons! The look of the spiral cold hammer-forged barrel against that laminated wood stock just has classic beauty! I also enjoy the pinpoint accuracy presented with this system mainly because of the hammer-forged barrel, v-block, and set screws. Hopefully, you've gained some insight on just how easy building a dream rifle from a standard off-the-shelf 10/22 really is! This truly is my dream 22lr!